How You Think About a Stock Price is Terribly Wrong 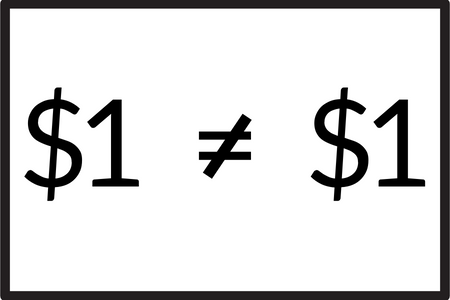 You’ve checked your smartphone app for the latest stock quotes, read an editorial about where the company is headed and just saw their ticker symbol float across the screen on CNBC, so you are certain of what the stock price is…right?

Everything that you’ve read and watched couldn’t be wrong could it? You have to believe what is reported don’t you? Otherwise, there would be mass panic that Wall Street is trying to pull the wool over our eyes.

Now before you start to try and get me committed, let me reassure you all of the info that you have read about stock prices is correct…almost.

Anything that you have ever bought whether online, at a restaurant or some retail store, wasn’t done without knowing how much it costs first. I know there are some items where you don’t care about the cost, you just make the purchase anyway, but just stay with me for a second.

If someone asked you how much a gallon of milk was you’d probably have no difficulty in giving them a general price range. Here in the U.S., depending on where you live, a gallon of milk could run you $2-$3. So the statement of a gallon of milk is about $3 wouldn’t be a hard concept to agree with.

Now take that same carton of milk and offer it for sale, only this time there has been some shortage of cows in the world. The original price of $3 that no one would have argued with is now gone up to $10 a gallon. Obviously in the scenario where there is a shortage of milk the supply has decreased while the demand has stayed the same. This would be the reason why the same exact item, with no improvements at all is now over 300% higher in cost.

Imagine that by some strange coincidence drinking milk could cure cancer (I know, I know… a little out there but just stay with me). All of a sudden milk is being sold for several thousands of dollars a gallon. Same milk, same carton, same source. The milk didn’t change, but the value people perceived of it did. I think you see where I’m going here.

I remember back in 2004 when I first started learning about how stock prices can change from one day to the next. It was really surprising when I realized that not only do they change from day to day but they can also change from second to second.

Then someone told me something that I have never forgotten.

the price a stock trades at is not what the stock costs…it’s just the last price somebody paid for it.

It’s a relatively simple statement but if you truly embrace it, it can free you from only thinking a stock should trade at one price…forever. This isn’t to say you have to totally ignore price targets from analysts or your own personal stock projections. It simply means don’t let the price of a stock be the only thing that keeps you in or out of a trade.

A really good example of price not accurately representing a stock’s worth is when some negative news report comes out on a company or one of it’s competitors. Oftentimes nothing negative has actually happened to the company. There may just be some concerns that the stock price may be in trouble so it prompts selling.

In the end there are many resources that you can look to try to figure out what a stock should be trading at. Just know that prices will always change. And that change in price will always reflect where everyone thinks it should be.

We use cookies on our website to give you the most relevant experience by remembering your preferences and repeat visits. By clicking “Accept”, you consent to the use of ALL the cookies.
Cookie settingsACCEPT
Manage consent

This website uses cookies to improve your experience while you navigate through the website. Out of these, the cookies that are categorized as necessary are stored on your browser as they are essential for the working of basic functionalities of the website. We also use third-party cookies that help us analyze and understand how you use this website. These cookies will be stored in your browser only with your consent. You also have the option to opt-out of these cookies. But opting out of some of these cookies may affect your browsing experience.
Necessary Always Enabled
Necessary cookies are absolutely essential for the website to function properly. These cookies ensure basic functionalities and security features of the website, anonymously.
Functional
Functional cookies help to perform certain functionalities like sharing the content of the website on social media platforms, collect feedbacks, and other third-party features.
Performance
Performance cookies are used to understand and analyze the key performance indexes of the website which helps in delivering a better user experience for the visitors.
Analytics
Analytical cookies are used to understand how visitors interact with the website. These cookies help provide information on metrics the number of visitors, bounce rate, traffic source, etc.
Advertisement
Advertisement cookies are used to provide visitors with relevant ads and marketing campaigns. These cookies track visitors across websites and collect information to provide customized ads.
Others
Other uncategorized cookies are those that are being analyzed and have not been classified into a category as yet.
SAVE & ACCEPT